First of, what is endometriosis??

It is a condition where the endometrial tissue that normally lines the inside of the uterus grows outside the uterus, either on the Ovaries or Fallopian tubes. 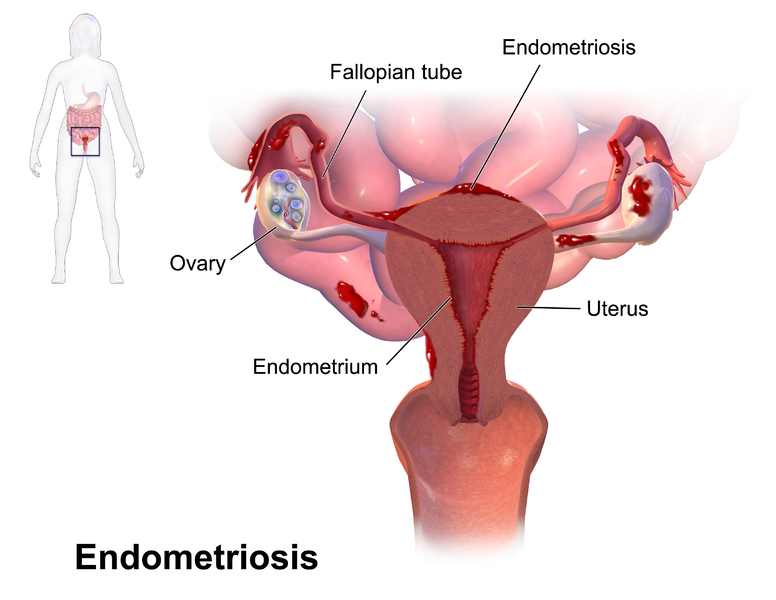 An illustration depicting the growth of endometriosis on the ovary, uterus and fallopian tube: image from wikimedia licensed under CC3

For some women affected with the condition, it could be painful while some don't even feel pain at all and the degree of pain varies; from mild to severe.

Endometriosis causes pain, although 20–25% of patients are asymptomatic.Source

While the exact cause is not clear, there are theories and also risk factors that have been thought to lead to the development of endometriosis

These factors increase the chances of being affected with endometriosis.

There is a six fold increased incidence of the condition in women with an affected first degree relative
It has been proposed that it's development is similar to that of cancer, in that it results from a series of multiple hits within target genes. The initial mutation in this case could be somatic or heritable.Source

Infertility and pain are the main symptoms of endometriosis.

How is it diagnosed??

After experiencing these symptoms, the best thing to do is to book an appointment with your doctor, so as to undergo some tests. The tests that could be carried out by your doctor include: An illustration showing the laparoscope being used: image from wikimedia licensed under CC3.

What are the treatment options??

After diagnosis,depending on the severity of the condition, the doctor recommends two options for treatment; Medication or Surgery.

Pain Medication
Over the counter pain relievers such as non-steroidal anti-inflammatory drugs (NSAIDs), Ibuprofen or naproxene could be recommended by the doctor.

During the menstrual cycle, hormones are usually not stable and this causes the thickening and break down of endometrial cells. Supplementary hormones could help to slow the growth of endometrial cells and even stop new growth. This treatment option is only effective for as long as you keep taking the hormone supplements. Types of supplements that could be used include:

Assisted Reproductive Technology could be used if the conservative surgery is not successful.

As a last resort, especially in patients that experience severe pain, hysterectomy is recommended. It involves the total removal of the uterus, cervix and ovaries too.
It is better to consult with a doctor you're familar with and it is also advisable to get a second opinion before deciding treatment options.

While endometriosis is a condition that could be managed and treated, it still kills. This is due to the ignorance of many about the condition, therefore, awareness of endometriosis should be increased and this will curb the mortality rate.

Thank you for taking time to read this!!!

A systematic analysis for the Global Burden of Disease Study 2015