Alopecia or hair loss is a condition where there is a loss of hair where they normally grow. It is otherwise referred to as simply baldness. This typically affects the head.

It is an autoimmune disorder (autoimmune disorder occur when the immune system attacks healthy cells) where the body thinks your own hair follicles is the enemy and attacks it. Since the hair follicles are where the hair grows, this attack could make the hair to fall off and stops to grow. Alopecia also comes in severe forms, such as alopecia universalis; in which hair is lost from the entire body, including the eyelashes. 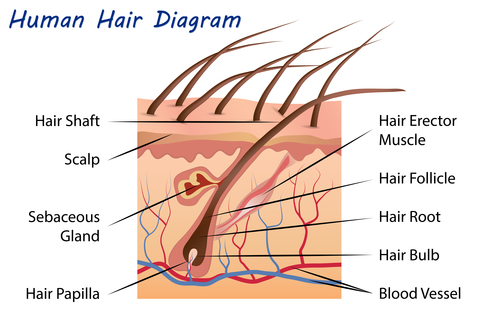 Source: A crossection of a hair

The stem cells which is housed in the hair follicle allows regrowth when hair is cut.

The hair shaft, which is the visible part of hair made up of keratin, the same fibrous family that nails and the outer skin surface have.

There is an average of 100,000 hairs at any time on a human scalp. These are growing (anagen phase), resting (catagen phase) and shedding (telogen phase).

About 85% of hair grows about 1 cm each month. The resting hair phase makes up about 3% of the hair and lasts for about 3-5 years. Estimated 12% of the total hair is shed every day ( approximately about 100 hairs daily).

The rate of loss is somewhat equal to the rate of growth for normal hair thus keeping hair at the same growth level. But with alopecia, there is an imbalance and the growth rate is severely stunted or totally stopped.

There two types of hair loss namely alopecia areata in which hair loss occurs in patches, alopecia totalis in which all the hair on scalp fall off, and alopecia universalis in which the total body is hairless.

The hair recedes around the temple, followed by thinning and then the scalp's top is bald. This is linked to a male sex hormone known as DHT (dihydrotestosterone) affecting the hair follicle gradually with the resultant progression of baldness.

Female pattern loss is usually milder compared to men's type. It usually involves thinning of hair loss on top of the head. Hair loss in the female is more likely to occur after menopause(fewer estrogens presence) as. It is often said to be caused by the overproduction of androgens (a hormone responsible for sexual development in both sexes, including sex drive and regulation of hair growth) due to a condition in the endocrine causing more secretion of androgen or an androgen-secreting tumor in the ovary, pituitary, or adrenal gland.

There is also hair loss in both sexes during the growing (anagen phase). This is generally as a result of chemotherapy medications, such as cyclophosphamide and doxorubicin. Radiotherapy treatment of cancer also results in hair loss.

Heredity: The most common cause of hair loss in the male pattern loss is mostly hereditary in which case there is no way of stopping it from happening except via hair transplant. Lack of balance diet: Food rich in protein, vitamins, and iron are required for hair growth.

Physical Trauma Accidents and other trauma can affect the hair growth cycle and lead to hair shedding instead of growth.

Bad Hairstyling Procedure or Product This is the harmful hair styling techniques, use of harsh chemicals all affect the normal growth of hair.

Medical Treatment: Chemotherapy and radiotherapy all leads to hair loss.

There is a lot of treatment option available for hair loss. Most of which are limited to interim measures as a full cure is not usually possible.

Google Free Image: Before and after hair transplant surgery pictures of the footballer Wayne Rooney

In many cases, hair loss cannot be prevented, particularly if it is caused by genes, hormones, an underlying medical condition or chemotherapy. However, a diet containing healthy levels of iron, vitamin B12 and folate can help to promote steady hair growth. Similarly, avoiding tight hairstyles, harsh styling products or vigorous brushing is also recommended.

Prevention they say is better than cure, so if you still have a full head of hair these are things you should start doing to prevent hair loss. If it is not genetic the following may help